Laundry Care is open and doing no-contact pickups & deliveries. Get 10% off your order w/ code LAUNDRY10 ....one time use. For more info on our no-contact deliveries and cleaning procedures ***click here***

How to Store Clothes 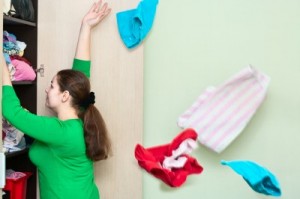 Spring has officially sprung and it’s time to pack away all of those heavy winter clothes. Between you and me, I never bothered to do such a thing until last year, after both of my children had growth spurts, which caused newly purchased clothes to over-crowd their dressers and closets. My original intention was to just gather the clothing they’d outgrown and donate it to charity, but as I went through their things, it occurred to me that I could create even more space if I packed away the winter clothes. As a result, we gained a significant amount of extra storage space in their bedrooms, not just for clothes, but for toys as well. Here are a few tips for you, in case you’re interested in tackling a similar project.

The first thing you should do when preparing to pack your clothes away for storage is to be aware of the moth activity in your home and garage. Catch and dispose of any that you see flying around, but know that it’s even more important to get rid of the invisible eggs that they lay. You may need to enlist the help of an exterminator if you notice a large infestation of moths.

The second thing you need to do is to wash or dry-clean all of the clothes you’re putting in storage. Doing so will get rid of larvae, as well as any hair, skin or stain residues that would nourish future deposits.

Next, invest in large plastic containers with air-tight lids. Look for ones that will be easy to stack in your basement, garage, attic or to store under the beds. If investing in containers isn’t an option, use garbage bags. Many people think that cardboard boxes are perfect for storing clothes, but the reality is that they’re easily accessible to moths, too porous to prevent water damage and they contain acids that will eventually break down the fibers in clothes.

Cedar chests are optimal for clothes storage, because they’re infused with a pleasantly scented oil that occurs naturally in the wood. This oil is the secret that prevents the growth of fungus and repels insects.

Finally, the chemicals in moth balls can be too harsh for certain fabrics and they tend to leave unpleasant odors on clothes, so consider including cedar chips or a few lavender and rosemary sachets in your containers instead. If possible, replace them every three months.

Good luck with this latest project. Don’t forget that Laundry Care will be available to wash and fold those clothes when you’re ready to take them out of storage.